SuperPhon™ acoustic wall panels for wall soundproofing are a composite construction and offer a fabric-covered solution for reducing sound reverberation.

Off-the-shelf solutions are available, or panels can be manufactured to the client’s exact specification.

SuperPhon acoustic wall panels are a flexible solution that can be tailored to any sort of environment. It can provide complete wall coverage or partial wall coverage. The fundamental attraction of SuperPhon is its adaptability.

With a wide selection of colour finishes and installation options, SuperPhon acoustic wall panels provide an aesthetically pleasing reverberation control solution for a range of application.

SuperPhon acoustic wall panels work in two distinct ways to reduce noise: 1) Impeding the transmission of sound through an element of the structure and 2) By absorption of sound at the surface.

SuperPhon acoustic wall panels offer up to Class ‘A’ sound absorption across a range of frequencies (125 Hertz, 250 Hertz, 500 Herts, 1000 Hertz, 2000 Hertz and 4000 Hertz) and provide a Noise Reduction Coefficient from 0.80 to 1.15, with an NRC of 0 indicating perfect reflection and an NRC of 1 indicating perfect absorption.

The SuperPhon core panel is non-combustible, rated to Class ‘0’ of the Building Regulations. SuperPhon standard fabric covering complies with BS476:1987 to Class 1. 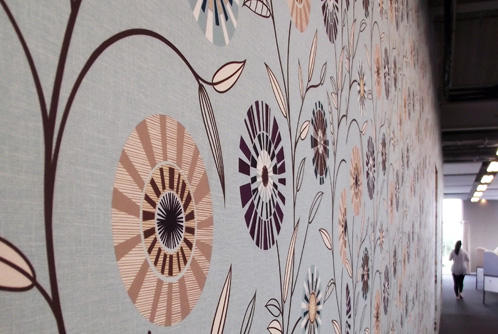 Born in 2000, Moneypenny leads the UK Telephone Answering Service and Outsourced Switchboard market with respect to its size, quality of service and technology – looking after more calls for more businesses than any other company of its kind. Central to the company’s service offering is its people. Employing over 500 bright, happy and capable individuals, Moneypenny aims to build a fun, supportive and fulfilled team that enjoys working together to make the company grow and develop. Having been listed in the Sunday Times ‘Best Companies to Work for’ four times, its successful growth has been achieved by staying true to its founding principles of ‘treat others as you would want to be treated’. 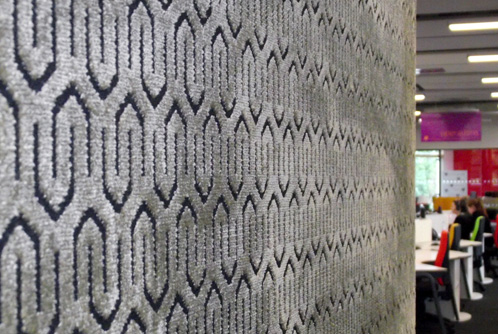 With a purpose-built development on the cards in its home town of Wrexham, Wales; Moneypenny had a 10-acre plot with which to design a new office space which could house up to 1,000 employees.

However, unlike many traditional office projects of this nature; Moneypenny approached the building design in a very unique way. The £15m headquarters’ top line brief was to create a development which would literally ‘put a smile on people’s faces’.

While the wider landscape was to include innovative features such as a tree house and a village pub for staff, the main three storey office had to satisfy the ‘work hard, play hard’ mantra of the business – and at the same time deliver an environment which fostered team work, collaboration and interaction. And to help achieve this, founder Ed Reeves was absolutely clear on one thing: the office had to be open plan yet feel welcoming, homely and inspiring…

Given the nature of the telephone and switchboard operations, this presented an unprecedented design challenge from an acoustic perspective. How could such a fluid space be achieved in a high density, high call volume environment, where call quality was crucial to business performance and customer service? 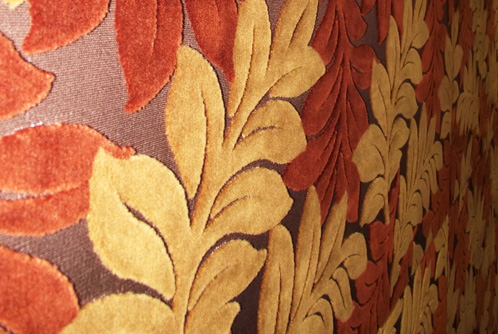 The design brief ruled out the standard approaches used to control acoustics in volume call environments: “In previous offices we went to great lengths to avoid the use of the commonly used ‘booths’, but working within the constraints of existing spaces sometimes made this extremely challenging with retrofit solutions. With a purpose-built development, we had the opportunity to get the design exactly right for the environment we wanted to create, and it categorically had to support open plan working that didn’t compromise quality or lack that homely feel,” explains Ed.

Based on the design parameters, the architects investigated a range of potential wall and ceiling treatments which could achieve the necessary reduction in reverberation times – but also provide a highly decorative finish which Moneypenny could stylise according the various team working zones.

The ideal solution was found in the CMS SuperPhon range from CMS Danskin Acoustics. Working closely with the architects, CMS Danskin Acoustics undertook a completely bespoke design process which balanced aesthetics with installation practicalities. For example, some panels were installed with a demountable fixing system to allow access to services behind ceiling rafts. Moreover, in other areas radii was applied to the corner panels so that they could follow the curvature of the wall.

A staggering 2,500 wall panels were installed over the two operational storeys of the new building, with a total contract value of £200k. From an aesthetic perspective, CMS Danskin Acoustics delivered a highly varied range of finishes and colours, from funky and bright patterns through to highly creative gooseberry fruit prints for Ed’s own office. 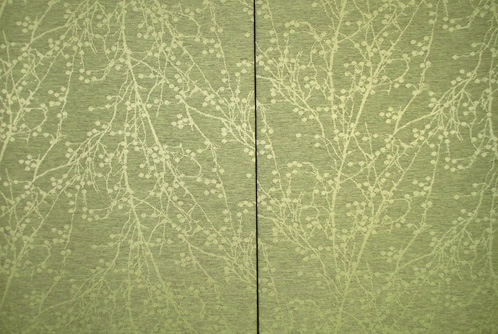 In just a few weeks since the new site opened its doors to the Moneypenny team, the impact of the SuperPhon sound absorption on the working environment has been observed by all who enter the building: “The building is proving to be everything that we dreamed it would be. We’ve got the sound quality we need to provide the exceptional service our business has been built upon, while creating a truly inspirational place to work.

“Without exception our team productivity is up – but any background noise is turned right down,” continues Ed.

Based on the success of this first phase of the development, Moneypenny intends to keep the tried and tested SuperPhon specification as it moves forward with plans to open up the third storey of the building.

As a truly acoustic-led building design brief, Moneypenny has broken new ground and demonstrated in a live environment that the seemingly impossible can be achieved: “I’ve been told that we’ve defied the laws of acoustics in some ways, but it just goes to show that breaking from the norm can actually create a better way. The new development and the acoustic quality we have achieved is living proof of that!” 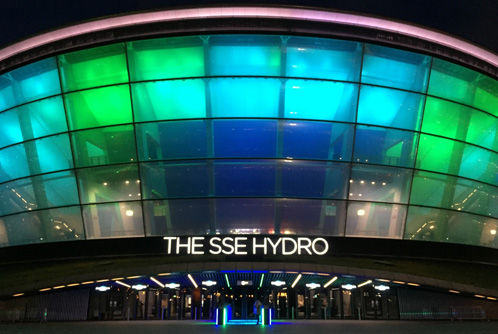 The SSE Hydro, the fifth busiest entertainment arena in the world, alongside the likes of Madison Square Garden, the UK’s biggest concert venue and Scotland’s largest entertainment venue, was announced in 2003 as part of the redevelopment of Glasgow’s Queen’s Dock. This hugely ambitious and visually arresting landmark opened to the public in September of 2013. Despite the decade-long project duration, contractors, subcontractors and suppliers were all working apace to meet their commitments.

Time is a funny thing, particularly in the construction industry. Anyone working on a major building project will appreciate just how long it can take to get from inception to completion. Yet, at the same time, the individual activities within the project that connect milestone to milestone always move at breakneck speed, with everything needed yesterday.

When Veitchi Interiors, responsible for the venue’s acoustics, discovered that the bespoke sound absorption panels specified for the job were accompanied by an unacceptable lead time, the search was on for a viable alternative. The replacement product not only had to be fabricated and delivered to a demanding schedule, it also had to meet specific technical criteria as guided by acoustic consultants, Sandy Brown Associates. It had to be a Class 0 product, conforming to BS 476 Parts 6&7. Acoustically, it was vital that the new product performed to BS EN ISO 354:2003. And because the product was to be used to line the walls and balustrades in the audience area, where the panels would be fully exposed to the potential for repeated and significant physical impact, the product had to perform to DIN 18032-3 for impact resistance and EN 15312 for rigidity.

A replacement product was soon found in the form of CMS Danskin Acoustics’ SuperPhon High Impact sound absorption panel. CMS Danskin’s product was available in time and met (and in some cases exceeded) the architect’s specification.

It may seem counterintuitive to be talking about sound absorption for a concert venue. A library, yes. But an arena which, as part of its remit to play host to more than 140 events per year, is expected to accommodate rock concerts?

There are two key areas for consideration when it comes to concert acoustics. The first is sound quality, the second is the issue of dangerous levels of sound. Although there are many electrical innovations that can assist in both these areas, the physical acoustics of a performance space are critical. An excess of reflected sound (in layman’s terms, ‘echo’) can measurably reduce the quality of a performance, particularly during classical recitals. In fact, it is not unknown for certain conductors to refuse to play certain venues simply because they do not feel the acoustics complement the piece they are to play. Johann Sebastian Bach composed for a particular church, Saint Thomas in Leipzig, due to its low reverberation. Hope Bagenal, the senior acoustic consultant of the Royal Festival Hall described this as “the most important single fact in the history of music because it leads directly to the St Matthew Passion and the B Minor Mass.”

With regard to the second issue, that of dangerous noise, the maximum ‘safe’ level for continued exposure to noise is around 85dB. On July 15, 2009, during a live performance, the band Kiss achieved a sound pressure level of 136dB, a full 51dB above the accepted maximum. At this level, immediate and permanent hearing damage can be sustained. Not to be outdone, on December 13, 2011 the Foo Fighters concert in New Zealand was recorded on the GNS Science Research Institute’s seismograph, a device normally used for measuring earthquakes and volcanic eruptions. Even the audience at an event can be dangerously noisy. The crowd at CenturyLink Field in Seattle during a Seahawks’ game against the New Orleans Saints achieved a noise level of 137.6dB, without the aid of amplifiers!

Again, technology (and personal liability waivers) provide some solutions, but effective sound absorption materials play a vital role, particularly, as is the case with SuperPhon, when it comes to absorbing those dangerous frequencies around 2000Hz, to which the human ear is especially vulnerable. To give you an idea of how dangerous these higher frequencies can be, for a sound at 50Hz to sound as loud as the same sound at 2000Hz, it would have to be somewhere in the region of 50dB more intense.

Although time had been the issue that had prompted Veitchi Interiors to seek out a new sound absorption material, construction schedules being what they are, it was no longer an issue by the time SuperPhon had been identified as a potential solution. However, CMS Danskin’s fast-track production schedule wasn’t the only quality attracting Veitchi Interiors to SuperPhon. A full 5mm thinner than the originally specified product, SuperPhon was also more cost-effective, enabling Veitchi to value engineer their contribution to this major project.