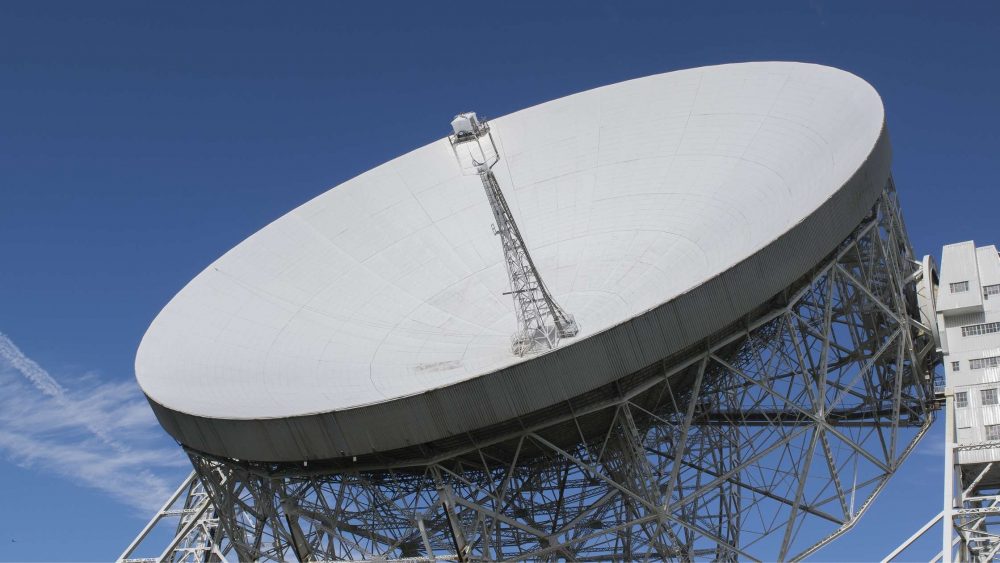 Hassel Architects and Robert McAlpine contractors collaborate on The First Light Pavillion, nestled in the Cheshire countryside at Jodrell Bank. The educational centre with a focus on not only the future of our planet, but of our universe.

Jodrell Bank is the northern heart of British space research thanks to the Lovell telescope, which at 3200 tonnes is one of the world’s largest radio telescopes. The site hosts the yearly science and music festival ‘BlueDot,’ named after one astronomer’s description of planet earth from space as a ‘pale blue dot.’ As the name suggests, the event aims to change the way we think about our planet, with huge mechanical sculptures made of recycled items created each year. It attracts scientists and speakers from around the world, including Brian Cox and Richard Dawkins, award-winning author of ‘The Selfish Gene.’

Drawing on the history of Jodrell bank, Manchester University are now embarking on a long term project to introduce a younger generation to science. The team believe ‘A passion for science, sparked in childhood, can be the catalyst that leads to bold new discoveries and a better understanding of the world around us.’ In order to spark this passion, The First Light Pavilion will use immersive installations to tell the history of Jodrell bank and it’s place in science history. The space will accommodate speakers, school trips and conferences, and will bring visitors from all over the UK.

Lead contractor on this project, Robert McAlpine have an equally future facing outlook. They are best known for the internationally recognised Eden Project, an indoor tropical paradise made of a series of interlocking biomes designed to emulate rainforest conditions. Unseen on this scale anywhere else in the world, Robert McAlpine constructed the world largest scaffolding, using 230 miles of poles. As well as looking the part, the offices are also built from entirely recycled materials, and the centre aims to promote caring for our environment. In a similar vein to The First Light Pavilion, the site was specially built to accommodate learning, as well as large scale festivals and events.

Hassell Architect’s ethos is focused on science education, winning them two AIA awards for their work with James Cook’s University’s science department. They were highly praised for “making science visible, accessible and attractive,” to both students and the general public. The firm is also known for recognising the changing needs of educational spaces in the digital age. Many of their projects focus on multi-use spaces that can be used for socialising, group learning and conferences. They are based both the UK and Australia, and have led projects everywhere from Brighton to Brisbane, bringing an international flair to the idyllic Jodrell Bank site.

CMS Danskin Acoustics describe themselves as experts in soundproofing solutions, and have a huge amount of well known projects to back this up. Many of their most inventive projects have been in partnership with SuperPhon, and showcase CMS Danskin Acoustics ability to create distraction-proof educational environments. Most recently they were involved in a reinvention of Teesside University Library. Tasked with breathing new life into the study space, CMS Danskin Accoustics suspended foam plates from the ceiling to emulate a rainforest retreat. The foam plates were specially designed with study in mind and dispersed sound, keeping interference at a minimum for the students below.

Reverberation is consistently a problem in large educational spaces, affecting sound quality and causing distractions. With 20,000 schoolchildren expected through it’s doors each year, and countless speeches and workshops happening year round, reducing reverberation is of high priority for The First Light Pavilion.  A useful measure for the effectiveness of any sound absorption solution is BB93: acoustic design of schools – performance standards. This details the level of sound absorption acceptable for a classroom environment. BB93 recommends reverberation time to be as little as 0.4 seconds, which should be used as the benchmark for this project.

In a similar technique used at Teesside University, SuperPhon’s sound absorption rafts will be suspended from the ceiling of the pavilion. They will integrate into the design of the pavilion, as they can be cut to bespoke sizes, mirroring the night sky above. The panels are sound absorbent, made of a composite construction and covered in acoustically transparent woven textile fabric..

Reverberation should decrease to 60 decibels in less than half a second, as recommended by the BB93, making The First Light Pavilion the calming educational space it was designed to be. The building will be able to comfortably accommodate thousands of visitors each year with minimal noise disturbances, allowing guests to focus on the majesty of space and the world around us.